Despite what you might think to look at one, human beings made rather good scientists. Their curiosity made up for the lack of brain power, and any race that gets themselves into that many wars is bound to have to invent a thing or two.

The project at the laboratories near Einstein, a town on one of Jupiter’s moons, Europa, was researching time travel. They were building a machine that they hoped would send just a single particle back in time by the tiniest fraction of a nanosecond. In March of 2127 they caused a temporal chain reaction that wiped the lab off the face and arse of the Universe. Along with the town, and Europa and Ganymede and Io, two of the other moons. Blasted the whole lot back in time. So far that some of the lab staff turned up in fossils.

Most species would consider the project a failure.

Most species wouldn’t dream of using such a device as a weapon, a bomb that could blow holes in history not just space, but most species didn’t have dirty, alien neighbours, like the humans did, living in the nearby Sirius system.

Autocannibalism is actually one of evolution’s most ingenious and beautiful solutions to the problem of storing excess energy. Rather than lug great deposits of fat around inside their bodies, like humans do, Sirians grew fruitlike blossoms on their backs. These broke off easily and could be eaten. Early on in their evolution this served not only as a food supply in times of need, like fat, but also confounded many a would be predator, who would stop for the snack, giving the Sirian a chance to escape.

Over millennia, civilisation embraced this rich mix of flavour and texture and mood altering hormone, wove it into the social and cultural fabric of Sirian life. The sharing of this fruit could be a profound personal event, often loaded with sexual or religious significance. It was impossible to begin to understand Sirian humour without first understanding the nuances of their blossom. Fundamental to courting and to the arts, it had even ended wars.

On earth they were simply seen as filthy alien scum who ate their own children.

They called the bomb the chromatic pacifier and the Syrians, like their home planets, never existed.

Champion by nature was a short story I wrote that I was invited to read live for Resonance FM on March 5 2010.

You can read it here or listen to it here. 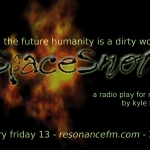 SpaceSnot was the second radio play I wrote. I also performed all the parts myself and created the sound effects.

Listen to it here.

this site contains material of a mature nature. if you are offended by anything you find here, then please let me know, so that i can tell you to go and fuck yourself.