All hail the vagina

I wish I could remember where I found this image (if you know please tell me). Truth is, its true. Women never came from a man’s ribs – sorry but that’s gotta be the silliest thing I ever heard – we came from a woman’s vagina. 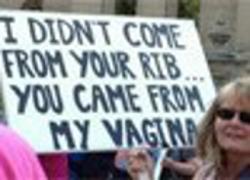 You know what it says on my old man’s gravestone? It a Keats quote, well, part of one, it says, “There is nothing stable in the world; uproar’s your only music.”  It was him all over.

I never met him. All I have is that quote from his grave and his writing, and I have quite a collection of that. Oh, and a half sister that I only discovered a few years ago. He wrote a lot, it was what he did, he was a writer. A lot of it was crap,  a lot of angry rantings about not being black and a semi-decent novel that only got, and only deserved, one pressing. He wrote it when he was 25 and I never put pen to paper until I was in my forties, so I guess I shouldn’t be too harsh on him for that.

He was a fantastic bullshitter. As was his father and his father before him and as am I, I come from a long line of great bullshitters. He told everyone that his old man was the editor of the Gleaner (Jamaica’s biggest newspaper). I tell everybody that too – complete crap of course.

Even though I never met him, I can feel him in me, his genes, his personality, pump through my veins. A lot of people didn’t like my dad, and I don’t blame them. He could be a real dick and was a cunt to women at times.

I try to be liked and say things and do things that will make people like me. He didn’t. He didn’t give a flying fuck what people thought about him and I so envy him. I think about the freedom that must come with that, to say what you really feel and not care what anyone says or feels.

I only visited his grave once. It needed cleaning, so I did, and I said “I guess this is as close as we’ll ever get then?” Then I sprinkled some poppy seeds, not just on his grave but all over the cemetery and left.

I will get back to proper erotica and story telling soon but right now I fancied a good old fashioned rant about shit.

we are what we are and what we are is apes – ask any professional, any cunt that knows anything about human beings, like a shrink or a therapist, they’ll tell you. ooh, that’s just denial or projection or whatever.

look at me? i’ve got a laptop and central heating and a guitar and an electric piano. I’ve got a a yukka plant in my fucking living room thanks to central heating and a playstation that has little universes that can just be plugged into it, i got shelves full of books and a laptop that contains more knowledge than any man can ever know. i’ve got a glow in the dark plastic tarantula that took ten weeks to build and a teddy bear called Denis Bearkamp (i never take my teddy bear to bed with me, ok?) i’ve had girlfriends on the other side of the planet and a bamboo shelving system that could collapse any second and i would throw it away if it didn’t look so cool. I have a thousand books and a thousand music CDs, i have hundreds of DVDs but i am still an ape, i wank like one, i eat like one, i look at the opposite sex like one and i enjoy life like one. stop looking for the spiritual meaning for life, the true meaning of life lies within the animal. grunt, fart, howl, throw your shit around and masturbate in public, panting and screaming, as a sign of your disapproval. sure, do it online, throw your shit at someone on another continent block that bitch from Zimbabwe or New Zealand but never, ever forget that you are an ape and be proud of that – its our heritage, our history, our roots – oooo eeee aaaa – repeat after me ooooo eeeee aaaa. learn it remember it, never, ever forget it.

this site contains material of a mature nature. if you are offended by anything you find here, then please let me know, so that i can tell you to go and fuck yourself.